John has been at work improving access to the organ mechanism. Getting to a faulty part is a much bigger job than actually fixing the part - this allows access to the pedal pipes air supply. 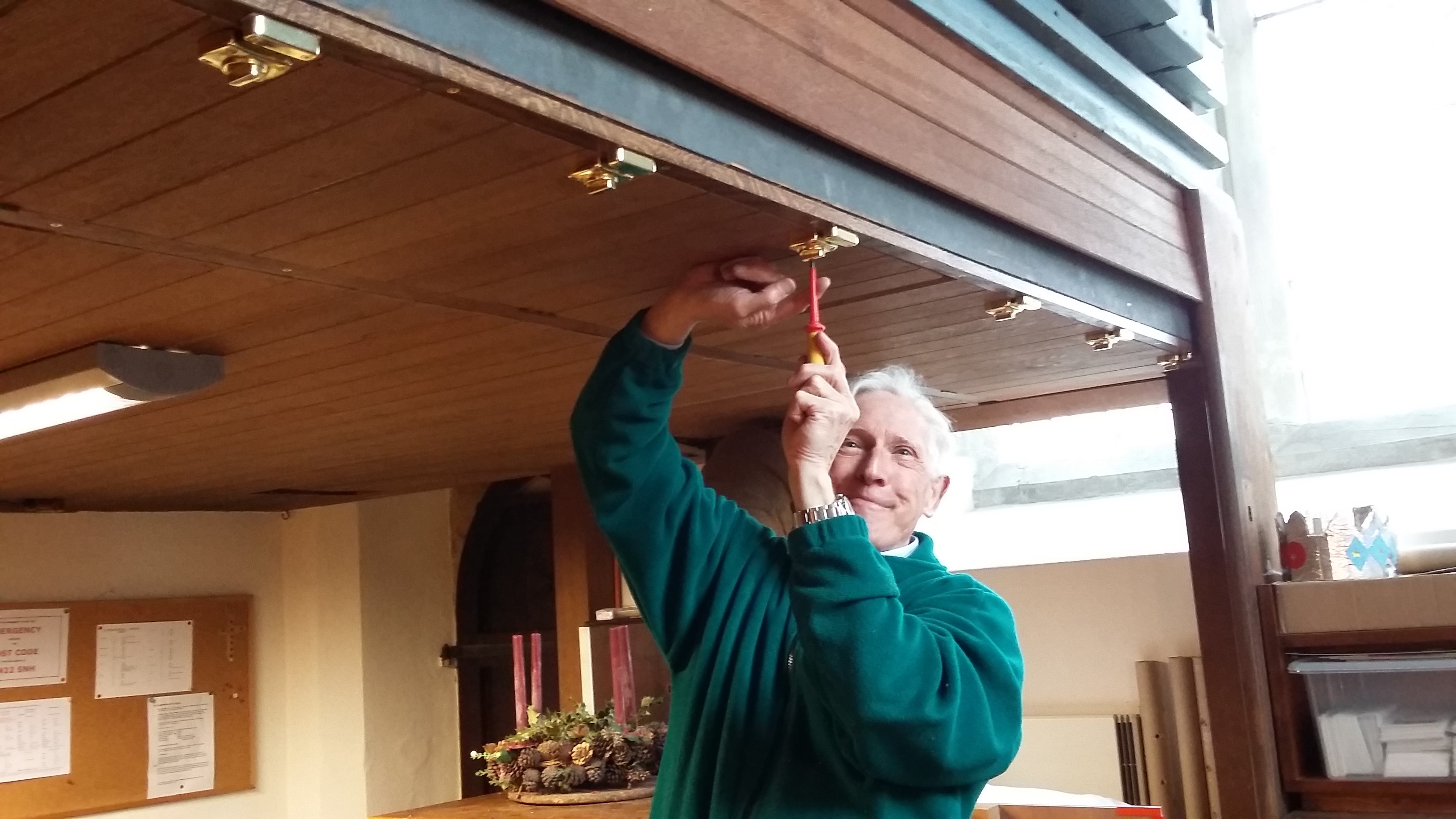 Mike Thompson and Simon Tipping from Thompson of Burton-on-Trent came down to inspect the organ on 26th April. Fortunately, they were the original team who put most of it together in the rebuild of 1996 (??) . It was a very useful visit, and they managed to put right a few current faults too.

As a result the organ now has a few more working pedals, and they also managed to improve the Oboe stop response too. Considering they drove down from Burton-on-Trent (and back the same day) it was amazing they had much time to actually work on things. Thanks to them both for their efforts.

Unfortunately, they didn’t have time to deal with the remaining sticking relays which were not easily accessible, and John Mordaunt now has the job of creating access panels to get to the other faults!

Thanks to John Mordaunt (who organised the visit) and also Peter Tomsett, who made sure there was a ample supply of tea, biscuits and cakes.

The organ dates back to 1900, and was built using funds provided by the Baxendale family of Framfield Place. The original builder was Nicholson & Lord of Walsall Originally the action was pneumatic and, apparently, very slow to respond.

In 1996 (or so) it was modified to include electro-magnetic action which is normally found only on larger instruments and in larger churches. This basically means air is let into the pipe by a control valve on each pipe when a key is pressed.

Most organs of small scale employ the more common tracker action which relies on numerous control rods and linkages to operate the valves. The tracker action is more difficult to play on, the more pipes in use, the harder it is to press the keys.

The down side is that the electromagnetic action sometimes sticks open and leaves the pipe continuing to sound after the key is released. This accounts for the "sticking" of some notes, which can only be freed by closing off the stop for a while. We hope to remedy some more of these "sticking" or "not sounding" faults once access is available.

There are around 920 pipes in the instrument and they vary in length from over 18 feet to 1 inch or less. The pipework is located in the organ loft, above the vicar's vestry. The pipes in the north aisle are not in fact functional, they just tidy up and cover the real pipes which at this point would be seen "end on" and not look too pretty. The pipes facing onto the chancel are fully functional and on occasion this comes as a rude shock to those sitting in the chancel, as these pipes are in fact the loudest sounding.

There are 22 stops and 8 combination thumb pistons give rapid selection of a group of stops. These are preset by the setter boards on each side of the console.

The pedal board is rather narrower then the usual radial-concave design.

Organ tuning is a complex business and only carried out by specialists, with an instrument of such complexity there is a great deal of variation of pitch with temperature and humidity, much like (but often worse) than that suffered by the traditional piano.

Thanks to Derek Thorogood for his assistance in putting this page right.